Welcome to article 2/3, which examines the usage & penetration of social media in Japan. This article emphasizes how critical it is for brands to comprehend how Japanese consumers use and rely on social media platforms. In a market with its own distinctive social media ecosystem, it’s crucial to remind yourself that your audience and what makes them tick are the core to the success of your social media strategy in a market with many local competitors. Only a brand with a thorough awareness of the market and its target audiences can succeed. 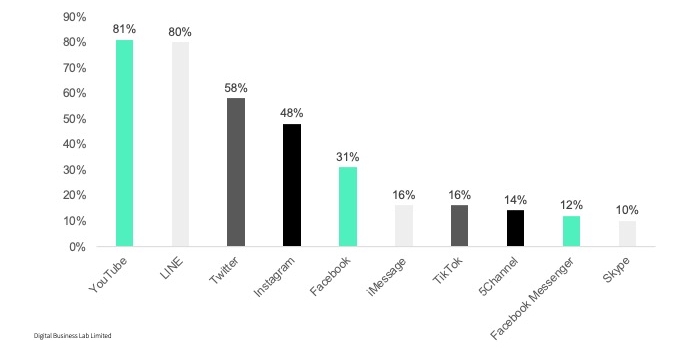 💡 Takeaways: In Japan, YouTube is the to-go platform to reach and communicate with the Generation Z audience.  In addition, the large audience for Vtubers has similarly created a desire for brands to reach those audiences. Brands are recommended to connect with the Japanese audience and show they understand their audiences through anime content, Vtubers or branded characters.

葛葉 Kuzuha – one of the most popular VTuber in Japan among Gen Z, collaborates with a Japanese skincare brand. LINE Timeline ads can be shown to all users regardless of their official LINE account’s blocked status.

💡 Takeaways: LINE’s messaging and video chat features are excellent, but that isn’t the only thing the app excels at. LINE has many other features that make them worthy of its super app title, such as Timeline, LINE Today, LINE Pay, LINE Games, LINE TV, LINE Mango, LINE shopping, etc. Brands are recommended to leverage the platforms’ wide variety of unique ads placement to reach their desired audiences in the Japanese market.

💡 Takeaways: Twitter is a precious resource for up-to-the-minute news in Japan. Communities that revolve around a specific subject or subculture also utilize it. It is an effective tool for achieving a particular segment. Brands are recommended to leverage Twitter as a channel to communicate with the Japanese audience as the core of customer service. Japanese audiences expect to get information about special sales, discounts or giveaways from an official Twitter page, be rewarded as loyal customers, receiving access to exclusive news not open to everyone.

💡 Takeaway: Brands are recommended to collaborate with Japanese influencers, who are now often active on Instagram. They have built up audiences who interact and engage with them everywhere they appear. Naturally, these influencers leverage platform features well to best suit their purposes, such as Instagram stories with links to product purchase pages. They have been getting creative with Instagram Reels as well. Japanese influencers are known to be shy, but we can see that now they own Reels entirely and are happy to upload short-form video content regularly.

Nakajima Ayano, one of the top fashion influencers in Japan, creatively leveraged dazzling visual effects in her Reels to promote the new launch by Adidas Originals.

💡 Takeaways: For B2B businesses, Facebook is more effective than LinkedIn for B2B marketing in Japan. Japanese people view LinkedIn as a job search site more than a professional networking platform. Facebook is where business decision-makers live and breathe social in Japan. Facebook has a larger user base of people over 40, the prime age of Japan’s C-suite decision-makers, who are also distinctly more active on Facebook than on LinkedIn.

Aucfan, a Japanese online platform that provides e-commerce price data across American, Chinese, and Japanese markets, establishes a stronger corporate presence on Facebook than on other channels.

In conclusion, Japan has its unique social ecosystem compared to other Asian & western countries. By understanding the social media penetration comprehensively in Japan and how people rely on these social media platforms, brands can create more meaningful connections with customers and better engage with people in Japan.