South Korea is one of the most connected countries in the world. Advanced domestic infrastructure and free Wi-Fi nationwide all accelerated the growth of smartphone users over the past decade. 95% of the population owns a smartphone. It is the first country in the world to commercialize a 5G network. Life of a young child born into the digital age to seniors learning the ropes of technology. It is hard to imagine for South Koreans to live without being connected to the internet in any shape or form. Based on these backgrounds, let’s take a look at South Korean social media.

Albeit being one of the world’s fastest-aging countries, South Koreans have a surprisingly high adoption rate to technological products and services. Naturally, the world of social media has caught on. South Koreans are now amongst the most active social media users in the world. Ranging from all ages, children are born holding mobile phones, while the Korean government is investing in teaching older people how to use social media as they are increasingly looking to social media to find new ways to communicate and reinvigorate their lives.

According to the research from We Are Social and Hootsuite’s Digital report, South Koreans routinely turn to YouTube, Facebook, and Instagram. However, they are also intensely loyal to homegrown Korean social media sites such as Kakaotalk (a free mobile instant messaging app), KakaoStory (a social network platform launched by Kakao) and Naver Band (a private group sharing app). Unlike most countries in the world, where Apple, Google, Facebook, and Amazon dominates, South Koreans have developed their own digital economy giants.

What is the domestic social media platform and do Koreans really prefer them to Westerners? This article explores these questions in detail. On top of that, we can start to learn a little bit more about South Korea’s technical infrastructure.

South Korea is one of the most connected countries

As the home country of hi-tech giants such as Samsung and LG, South Korea was one of the early adaptors of smartphones and mobile internet. Both quickly became an integral part of the everyday lifestyle. As long as smartphone users have a web connection, they’re probably on social media.

As of January 2020, South Korea had the third-highest rate of active social network penetration in the world. 87% of South Koreans use social media, far ahead of the United States (70%), Canada(67%) and the United Kingdom (66%). But as we’re about to examine, the South Korean social media landscape is a little more complicated than westerners might expect.

How are the domestic platforms different from western platforms?

Domestic platforms and infrastructure play an important role in shaping the social media scene in South Korea today. Apple to Samsung, Google to Naver, Facebook to Naver BAND, Amazon to Coupang and Spotify to Melon. Let’s have a look at a search engine. South Korea is one of the few countries where Google does not dominate search. Naver, which owns Band, Line, Naver blog, and Naver café captures the highest of the Korean search engine market share.

Naver is the most popular search engine amongst South Koreans with a 57% market share. The layout of Naver’s search engine result pages (SERPs) looks very different from what we are used to seeing on Google. The exact order and layout vary depending on the nature of the search query including Naver blog, image, Knowledge iN, Naver café, video, shopping and more. 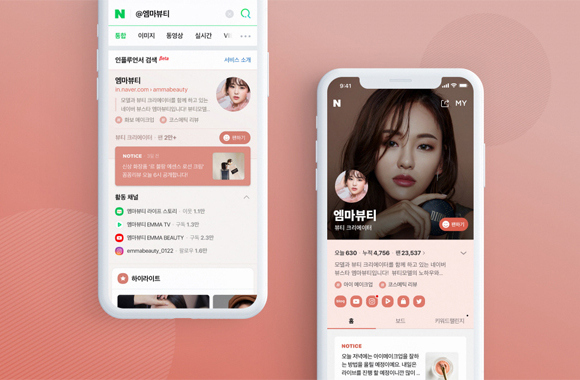 Recently, Naver released the “Influencer research” function as part of its efforts to provide a creator-friendly platform and technology. It enables users to enjoy search results with contents from Naver Blog, Naver Post and Naver TV, as well as content from non-Naver platforms such as YouTube and Instagram. In addition, this search function will return content created by influencers, alongside traditional search results.  For example, a search for “Paris travel” will yield results from travel agencies and such. On top of that, Naver will also display relevant influencer content in the top sections of the page. This can be interpreted as an attempt to bring the ecosystem of creators, which has traditionally been limited by western platforms, to the center of Naver.

What are the most popular social media app in Korea?

The best example is BAND by Naver – it is a mobile community app that lets its users communicate in groups, organize offline groups and find new groups based on their interests. According to local market research firm Nielsen Koreanclick, Naver’s social network platform Band is ranked as the most popular social media app with a total of 19.48 million users in Korea last month. The second most used social media app by Koreans was Instagram with 15.23 million users, followed by Facebook with 13.88 million users. The app is one of the most used social media platforms by South Koreans of all ages, but especially enjoys great popularity within South Koreans aged 40 and above. The proportion of Band users by age is 35% aged 10’s to 30’s, 54% in 40’s and 50’s, and 11% aged 60 years and older. Another example of the popularity of local services is KakaoTalk. Although it is not well known globally, KakaoTalk is the most popular messenger in South Korea, used by 99.1% of all mobile messenger users.

Especially with younger generations, social media platforms play a big part in their daily life. International platforms like Facebook and its subsidiary Instagram enjoy great popularity. In recent developments, Instagram’s popularity is constantly rising and the network might surpass Facebook soon. It is also worth mentioning the growing popularity of YouTube, with 80% of South Koreans using it as the main social media in 2019.

The popularity of both domestic and western platforms shared by South Koreans makes this a more complex, but a unique place for social media evolution.